Sailing Back to the 1800’s to an Abandoned Island 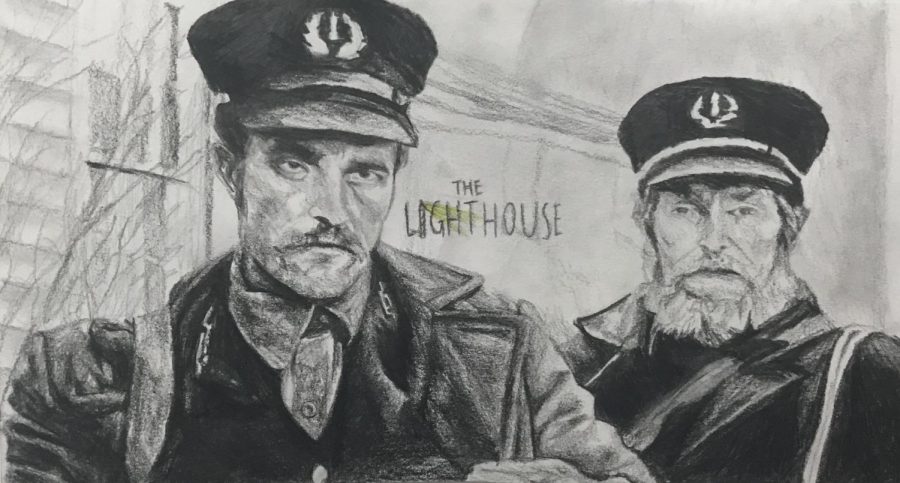 On October 18, 2019, a new thriller by the name of The Lighthouse hit the theaters with new intentions. Produced as a black and white film based off of a true story from the 1800s, the audience walks into the cinema with an open mind, and out with a whole new perspective.

The Lighthouse basically tells the story of two lighthouse keepers who try their hardest to maintain their sanity while living on a remote, mysterious island in New England in the 1890s. Set in such a time period, the movie is structured in a particular decade where they live with an entirely different kind of lifestyle, so a majority of the film circulates around a lot of those daily practices like smoking, dancing, and sometimes the usage of harsh language. Those aspects add on to the authenticity of the film, making it a more uniquely immersive experience.

Additionally, the movie possesses many cinematic components that add to the depth of the film. To begin, Wall Street Journalist, Joe Morgenstern remarks “The Lighthouse is a shining example of the impact a film can have, even when it’s made with modest financial and physical resources.” Following that thought, it is clear that the movie is authentic to its time period, and does not exaggerate on any factors of the actors’ life to make it seem unrealistic at all. For example, the fact that the director chose to shoot this movie in a black in white color scheme symbolizes several aspects that advance the movie. The gray tones represent the bleak mood of the characters, and  colors on the darker side show the challenging times for characters.As the characters strive towards hope, it moves into a lighter scheme. With several of these components accumulated, it adds a whole other perspective that the audience is provided with an insight.

Robert Eggers, the film director, is the one responsible for creating such a unique film. He is best known for his horror films. He has directed a well known movie called The Witch, a mystery drama released in 2015 that explains the scenario of a certain family, when their son vanishes. The daughters provide their only source of information as to being the only witness of the scene. His intriguing filming career has mainly brought fame upon those two productions, being The Lighthouse and The Witch, and he likes to experiment with fading schemes of color, as well as set the story line into a past decade, making his works particularly original.

This movie has definitely attracted an array of audience members, and provides a worthwhile experience to have. “There was some enchantment” in the movie that created a different varying reactions from typical productions.